Aryssa Peters’ hard work and determination have earned her the honor of being positioned in her class’s top ten. Her family, friends, and extracurricular activities have shaped her into the best version of herself and motivated her to receive this honor. 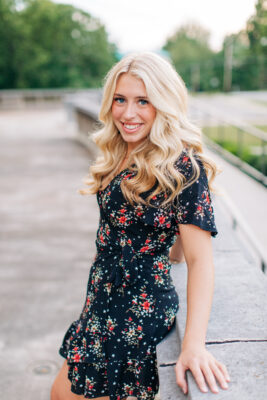 Peters’ parents have been her biggest supporters throughout her academic career. She says, “They have pushed me to be a good student and work my hardest, but have never pressured me to be perfect because I’m very hard on myself already.”

Alongside her parents, Aryssa’s sister has played a big role in her life. “My older sister Alexis has been a huge influence on me. We’ve done the same exact classes every year throughout high school. She’s in nursing school right now and is graduating this year, which is also what I am doing. She has been able to talk me through what has been hard for her and what I should expect in the future.”

Aryssa plans on attending Duquesne University in Pittsburgh, where she will major in nursing. “I think Shenango has prepared me through my AP classes because they allowed me to get ready for how much work I will have to do in college and also showed me how to be independent.”

The most important lesson Aryssa has learned outside of her schooling is to “make the most out of your time here. It may seem like a long time being here for 13 years, but honestly, time flies, and after you’re done here, people go their separate ways and you probably won’t see them again.” She also offers great advice to the students following in her footsteps. “Top 10 doesn’t define who you are. My ranking has fluctuated throughout the year and it has not changed who I am. It doesn’t matter if you’re first, it doesn’t matter if you’re 10th, it doesn’t matter if you’re 50th. As long as you’re doing your best, I think that’s good enough.”

Keeping up her GPA has kept Aryssa motivated throughout her last five years at Shenango, as she has pushed herself to maintain an excelling 4.44 GPA. Going off of her success, the wisdom she offers is “don’t pressure yourself to be perfect.  As long as you do your best, that is all that matters.”

Peters’ favorite class she has taken in high school is AP Biology, and her favorite teacher is Mrs. Allen.  Her most challenging course, she stated AP Chemistry. “AP Chem can definitely be a lot of work and very fast-paced, but I also think I surprised myself with that class. I did better than I thought it would, but at the same time, I was working harder than I ever have in high school.”

Aryssa’s favorite and most rewarding elective is choir. “If I wasn’t in choir, I wouldn’t be in musicals and Treble and Chamber Singers, and I would miss out on going to states. I have built many friendships through those activities, and they have been a big part of high school for me.”

Aryssa’s experience at Shenango has been filled with joy from both danceline and the musical. “ Both of them are very similar in a way because I’ve made good, lifelong friends. It’s also nice that they are at different times of the year, so when football season is over, I can look forward to the musical in the spring.” In addition to her extracurriculars, Peters’ long-lasting friendships and having fun in class are what she will miss most about high school.