Cole Sickafuse is a determined student who refuses to give up even during the most strenuous times. This characteristic is what earned Cole a spot in his class’s top 10! 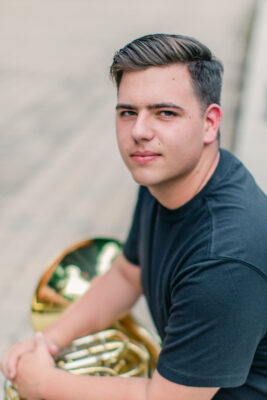 Cole’s sister Abby has been his biggest academic influence throughout high school. “She always worked really hard and has inspired me to do the same.”

Cole’s drive pushed him to work diligently in his most challenging class, AP Chemistry. “It showed that I do have a breaking point but also that you have to work hard in order to succeed.” Mr. Vecenie, Cole’s AP Chemistry teacher, was a positive reminder that he could move past the struggles that were thrown at him, and this experience is something Cole will take with him in the future.

Cole is proud of his accomplishment of earning a spot in the top 10 surrounded by peers who have pushed themselves just as he has.   “When I found out I could still be a part of the top 10 it motivated me to work harder.”

Although Cole is excited for the future that lies ahead, he is going to miss having the opportunity to know his classmates in this small town environment.  Some of his best memories come from the music wing where he’s surrounded by those who share his same passion.  “My favorite elective has been band because I could meet people with the same interests as myself.”

Along with band, Cole has also been involved with the golf team. “It has been an outlet for me to help relax and relieve stress that comes from school.” His motivation in school and extracurriculars comes from knowing that  “as long as you care enough about something, you can get to where you want to be.”

Cole’s future plans are to attend Kent State University to major in business/pre-law. “Shenango has prepared me for this by offering AP classes and overall teaching me to have a good work ethic that I will carry with me throughout my life.”