by Sophia Bupp and Lyndsey Jennings

Joshua Bruce is a man of many talents as a member of the chamber choir, marching band, school musical, cross country, and track and field. Joshua’s tremendous effort throughout his high school career has led him into the Top Ten of Shenango’s graduating class of 2022.

Of his plethora of school activities, Josh’s favorite extracurricular has always been cross country. “I’ve been doing cross country since seventh grade. I really liked the people in cross country and just the sport in general. It’s taught me a lot about work and determination.” 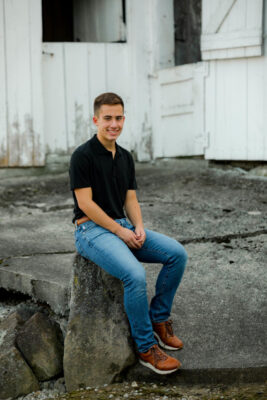 This gained work ethic helped Bruce greatly in his most challenging class, AP Chemistry. Though it was a difficult course, it helped him immensely in preparing for college. Along with this college credited class, he also developed a favorite from over the years, Spanish. “I wasn’t sure if I really wanted to take it at first, but since I’m in Spanish Four, I [think] it was really good. It’s been [with] a great group of people.”

One person who has been with Joshua through it all and continues to push him is his twin sister, Riley Bruce.  Riley has always driven him academically. They are both extremely motivated and have always helped each other through their education.

Joshua shows this same spirit and determination in all his activities, including Boy Scouts. He has been a member of the Boy Scouts since first grade; his most recent accomplishment in this group has been gaining the rank of Eagle Scout. Joshua expressed the great influence being a member of the Boy Scouts has had on him: “My Eagle Scout project has taught me a lot about how to talk to other people, communicate with them, and also communicate your ideas and plans to them so that everybody can work efficiently.”

An outside activity that Joshua loves to participate in is hunting and fishing. He has been involved in these outdoor activities since he was seven and loves to go with his friends and family.

In preparation for his future, Bruce has leaned on his parents’ support for him throughout his life. They would always take him to his lessons, get tutors and generally push him to be the best he could become.

Joshua’s advice to those in high school is to stick to your schooling and work hard. This had never been a question to Josh since he has known for a while what he has wanted to do with his future. “I really wanted to get into a good school, [knowing] what I wanted to do [in] the future. I knew that if I worked hard in high school, I’d be able to do better.”