by Madi Iwanejko and Janie Natale

Shenango High School’s teachers nominate students who go above and beyond during the school year and acknowledge their amazing academic achievements as well as their kind and caring personality. For the second nine weeks, Owen Krepps won the Student of the Nine Weeks for the freshman class.

Many teachers, such as Mrs. Miller, Mr. Mayo, and Mrs. Leali, noticed all of Owen’s hard work and dedication throughout the nine weeks.  Science teacher Mrs. Miller says that Owen is a “goal-setter and when he sets his mind to something nothing can stop him from accomplishing it!” 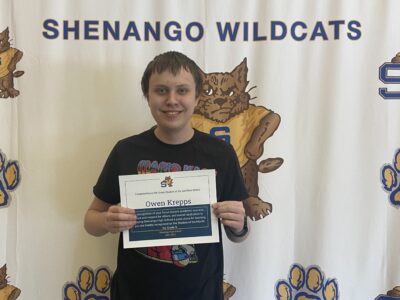 “Owen is deserving of Student of the Nine Weeks for many reasons,” Mrs. Delaney adds.  “He is extremely hardworking, participates in class, is always willing to help a classmate, and is an overall nice person.”

Whenever Owen thinks of a good teacher, he thinks of someone who doesn’t get distracted easily, keeps order in the classroom, and someone who can project to the classroom the information that you will continue to use in your academic career.

Some of his favorite classes are choir, English 9, and Composition. He enjoyed writing stories in his first-semester composition class, he enjoys reading in English and all the fun activities they do, and he loves singing, which makes choir one of his favorites, too.

“I am always floored by the book talks I have with Owen,” Mrs. Allen shares.  “He is such a deep thinker and connects in unique ways to the text.  He makes me laugh every day.”

Owen’s love of reading is matched by his talent for writing.  Owen is a uniquely gifted student. His blend of creativity and passion for narrative writing was very evident,” explained Mr. Mayo.  “Not only did Owen write an engaging story, but he also included all of his classmates in it. His unbridled enthusiasm was contagious and the entire class benefited from it.”

Social studies teacher Mrs. Merryman also enjoys Owen’s passion.  “Owen is a very hard-working student who has a great interest in world events,” she notes. “It is refreshing to see his excitement and interest as he often asks for more information for him to further his own research.”

Owen participates in the chamber choir and he is involved in Shenango’s drama club. Owen will also be in the ensemble for the musical, Legally Blonde. This year, the Chamber Choir is going to Disney. His other hobby is playing video games; he enjoys connecting with friends through a virtual setting.

Someone Owen has really looked up to is his father. He has given Owen a lot of advice on what to do during his school life and his dad is also the biggest motivator when he needs the inspiration to get his work done.