By: Angelina Melillo and Emily Dottle

If you are looking for 8th grader Trey Ross, it’s a toss-up whether you’ll find him in the east wing playing percussion or in the west wing practicing for the multiple sports he plays.   His talents are diverse, which means that managing his time is of utmost importance to him.

“I balance my time by doing my homework as soon as I get home so that I have time for practice later,” he explains. “Between band and choir, I try to go to when I am available, and I try to get as much practice as possible.” 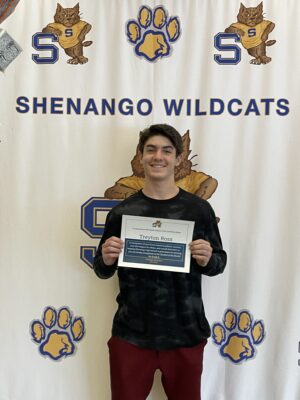 Trey works this hard because he “wants to plan for the future and definitely go to college.” He believes being organized and planning ahead are qualities that will help ensure his future success.

Teachers such as Mrs. Slamecka, Mrs. Leali, and Mr. Drozynski witness firsthand Trey’s daily motivation and determination towards both school and extracurricular activities. Mrs. Leali, choir teacher, notes, “Trey is a really talented and hard-working student. He is always happy, and has a smile on his face.”

Trey believes the traits of a good teacher are “someone who gets to know the students well inside and outside [of class], not just grades, and also look at personality.”

For Trey, he excels in Algebra the most. He feels that he understands math more than his other subjects. Mrs. Slamecka, his Algebra teacher, is impressed with these traits in him as well. She states, “I have been really impressed by Trey’s work ethic, focus, and determination.  I see him push himself on a daily basis to grow and improve as a student.”

Science teacher Mr. Drozynski shares similar sentiments.  “Treyton shows academic grit; he makes sure he understands before moving forward.  He asks questions in class.  He offers help to those around him.”

Trey looks to his older brother for inspiration.   “My brother who goes to Penn State Behrend [is who I admire because] he worked hard in school. I want to be as successful as him, if not more.”