by Ashley Decarbo and Julia George

Qualifying to be chosen to attend the Pennsylvania Music Education Association Festival is an amazing honor, as its’ participants span throughout four counties including Lawrence, Mercer, Butler, and Beaver.  Shenango can boast of six Wildcats selected, including Josh Bruce, Mathew Chapnell, Cole Sickafuse, Angalina Depaolo, Antonio George, and Zach Chrobak. 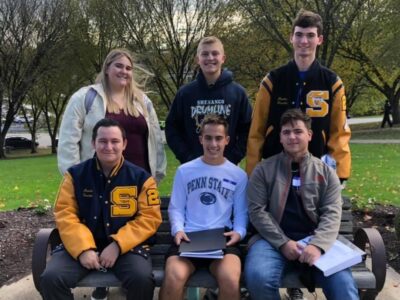 These prestigious singers attended workshops at Westminster College for three days in October. Each student was given eight songs that they had to prepare to sing. Despite this, only two were chosen at random to perform in front of the judges. If a person scored in the top section, they move on to regionals and then compete again to move on to states. On the third day, everyone that qualified comes together and performs.

The students that attended PMEA loved the return to normalcy.  According to junior Zach Chrobak, the best part of the experience was “being around new people and making beautiful music.” Antonio George, also a junior, learned a lot, pointing out his favorite part of PMEA was ¨learning. I have learned way more than I could have ever thought from the guest conductor, David Holdhusen.¨

An especially incredible honor was bestowed upon senior Joshua Bruce who qualified for all nationals, which only one other person at Shenango has ever done. In order to earn this accolade, singers must qualify for All-State as an underclassman so that next year, the singer can return and audition for All Nationals. Receiving this honor signifies that a student is one of the best in the whole country as the group represents talented vocalists from all 50 states, and Josh competed against all of them. Even though the festival will be virtual this year, Josh states, “ I was absolutely stunned that I even got in, but I am so excited to attend the festival!”

“Josh is incredibly talented and his hard work ethic has more than paid off,” Mrs. Leali said.  “I remember his very first PMEA festival his freshman year and pinning his first pin on his robe.  I said, ‘Here’s your first pin…can’t wait to see where this journey takes you!’ I never dreamt that it would lead to such all-around success and National accolades.  After the two years we have had, it would have been so easy to not try and just throw in the towel. I am incredibly proud of his self-motivation through such a difficult second half of high school.”

Josh’s talents will be showcased the Friday after Thanksgiving when he sings the National Anthem at Heinz Field for the WPIAL District 1A Championship.