by Emilee Fedrizzi and Janie Natale

Whether you saw her on stage at the musical, heading down the east wing hallway, or on the track cheering loudly with pom-poms, she is always welcoming others with a big smile. Senior Makenzie Peretti is one of the six 2021 Homecoming Court candidates.

Makenzie is honored to be nominated for Homecoming Court this year and will be escorted by life-long friend Tino Campoli. They have been friends since elementary school, and Kenize knows “he’ll make me feel at home.” 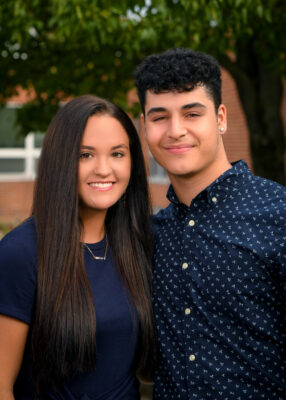 Kenzie’s biggest role model is her father. “He is so hard working. He’s very easygoing.” Her mother is also important to her, as she is very close to her and can go to her with any complications. Having this support system in her has instilled these values in Kenzie as well.

Not only are her parents her biggest fans, but Shenango’s support system has also been a prominent part in shaping Kenzie’s story. Kenzie stated how Shenango is welcoming to the fact that one can be different from the rest. Teachers and staff have shown her that she does not need to go down just one path in order to be successful. She is planning on college, but she is not sure where yet.

The extracurriculars at Shenango have been nothing but stellar in Makenzie’s time at Shenango High. She has been a cheerleader ever since she was little and is also a member of the performing arts. “They’re just amazing people, and I’ve learned so many lessons from them,” Kenzie says about the people she has met through cheer. She has also thoroughly enjoyed her time in the east wing hallway. Kenzie thinks joining choir is one of the best decisions of her life, and Mrs. Leali has been an amazing friend, teacher, and role model to her.

Kenzie can’t deny that she’s facing a senior year where Covid is still very present.  However, she believes learning to live in the midst of a pandemic has made her stronger as well as the people around her. “It’s just amazing to see how people adapted.”

Makenzie knows the class of 2022, along with the rest of the student body, are going to have a blast at homecoming. She views this as a “get away” from reality and notes, “ I think we’re gonna make a lot of memories. “