“I was very surprised. I did not think I was going to get on [the homecoming court], but it was exciting to hear.”  Kylee Rubin is one of six seniors nominated by the Class of 2023 to this year’s Homecoming Court. 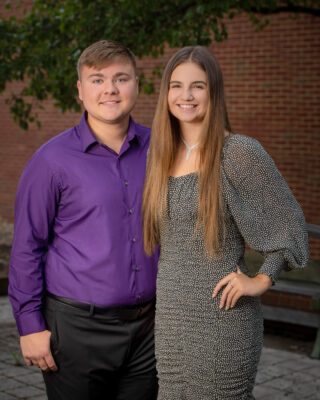 To be on court is an honor for Kylee, especially as she recalls how she has admired all the past homecoming court candidates  One, in particular, stood out to her, this year’s past homecoming queen.  Her admiration for Riley Bruce was simply because of “how kind she is.”

Kylee’s family has played a tremendous role as a support system. “My family has supported me through literally everything I’ve ever done. I don’t think they have missed any of my games,” Kylee commented. “They’ve just always been there for me no matter if it’s good or bad.”

Kylee admires not only her parents but also her sisters.“They’ve been role models ever since I was little and just always having them be there for me is special,” Kylee explained.

She has also always felt a connection at Shenango.  “I really love the teachers and how supportive they are. You can always go to them for anything and they’ll help you,” Kylee mentioned. “The support system that I have from my parents and sisters as well as my teachers always encourage me to do my best in school and in life.”

Kylee has grown up watching her sisters play their sports, which is where Kylee’s love for volleyball came from. While Kylee also plays basketball, her love for volleyball triumphed. “I would say volleyball is my favorite sport because the team aspect is so exciting, [and overall] it’s just so fun to play.” Kylee will be continuing her volleyball career by playing in college. Kylee is committed to playing volleyball at Indiana University of Pennsylvania.

Kylee chose Tyler Valenti as her escort because of their close relationship throughout their school years. Kylee and Tyler have been best friends since elementary school which made it a no-brainer when it came to picking him.  “He is a person that you can always count on and have a fun time with no matter what”.

Kylee’s experiences have helped her gain some wisdom to impart to those in grades below her.   “My advice to underclassmen would be don’t take anything for granted,” Kylee stated. “High school goes by very fast. Enjoy every moment you have with the people around you.”