You might recognize her as an actress on the stage during your favorite school musicals. Or maybe you’ve seen her under the lights cheering on the football team. This week, Jordyn DeSalvo will be walking across the football field as a member of the 2022 Homecoming Court.

The nomination she received came as nothing but a surprise to Jordyn. “I was just shocked because our grade is so unusually close and I was not expecting it,” she said. Although this news was unexpected, it is something that will make her senior homecoming even more exciting.  “I think it’s special because it’s my last one and I’m trying to enjoy every part of it.” 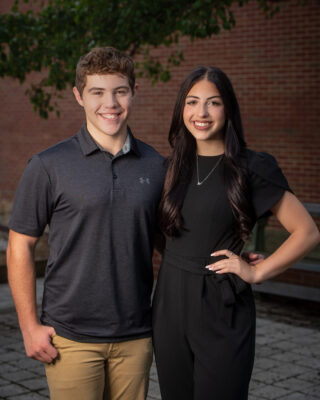 “I feel like a lot of people look forward to it when they are in junior high,¨ she went on. “Even if you are not a part of the homecoming dance, it is still an exciting time at the homecoming game,” Jordyn “I just love getting ready for the dances, and all of the excitement that leads up to it.”

Adding to the excitement of homecoming, Jordyn’s escort will be Hunter Hohn. “I chose him because we’re involved in a lot of the same activities,” Jordyn noted. “I just felt like he’s one person that I would like to be by my side during this.”

A previous court member that holds a special place in Jordyn’s heart is her sister, Brianna DeSalvo. Brianna won homecoming queen in 2020. “I have always looked up to her for being on court,” Jordyn shared.

While she looks up to her sister, her aunt is also someone she admires. “She has always been there for me,” Jordyn explained. In general, Jordyn’s whole family has stood by her side her whole life. “They’re just always pushing me to do my best and are there for me.”

Although Jordyn is undecided on where she would like to attend college, she has decided she would like to major in radiology. Until then, she will follow her own advice to the underclassmen: “Don’t  involve yourself in unnecessary drama because it won’t matter when you get to your senior year.”