A student of diverse talents, Adam Bryant finds himself a member of the Class of 2022’s Top Ten students.

Adam credits Mr.Vecenie as the biggest influence in his academics throughout high school.  Bryant especially recalls his junior year, which was spent partly in quarantine.  ”Last year when we were under hard conditions like quarantine he really pushed us and he made me learn the most I could out of that class.” 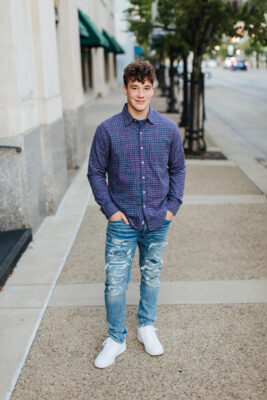 While Mr. V was extremely influential in Adams’s education, he saw AP chem as a challenging course as well as anatomy with its cat dissection, which “had a ton of information.”

While Adam had difficult courses he persevered and kept his drive to be the best student he could be. He is his biggest motivator, as Bryant recognizes that “at the end of the day, I’m [working to succeed[ for myself.”

While Adam relies on himself as his main drive in school, he noted that his mom is who he would thank for preparing him for the future. “She is always pushing me to do my best.”

Baseball is the extracurricular activity that Bryant has cherished the most, and he sees his teammates “as a group of brothers even though this is my first year.”

The most important lesson Adam has learned in high school is that“in the end, it doesn’t matter what anyone thinks here; it is just high school.” For those who follow in Adam’s footsteps, he wishes that “the only thing you should take seriously in high school is your academics and sports success, not drama.”