by Rylee Barron and Madi Iwanejko

For many band members of the class of 2022, they will bid farewell to not only their high school days but to a ton of memories made in the band room.

Many of those memories they will take with them revolve around band camp.  For Sophia Bupp, a standout memory involves when Bryce Enscoe, a band graduate, got his phone stuck in the sousaphone of alumni Gavyn Strickler.

Tyler Mastropietro points out the time when “at the end of every band camp we [seniors] throw water balloons at everyone because of the hot weather.”

It’s not just band camp, but bus rides that also bring out the laughter. Josh Bruce notes the memory, “On the way back from Kennywood singing ‘Country Roads’ by John Denver was awesome.”.

Throughout all the laughs and giggles the senior band members reflect on, they also remember who inspired them the most. 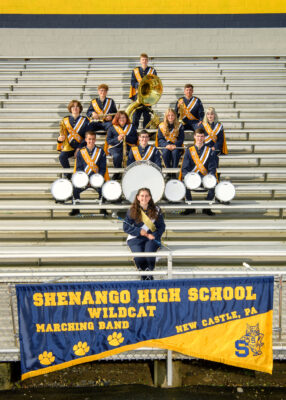 For Nicolette Egetoe, it’s an underclassman who stands out.  “I think Alayna Winter. She has pushed me every day since the day I met her and even outside of the band she is my biggest supporter!!”

Tom Doran said, “Anna Bupp. That was the first drum major that I was introduced to at Shenango High School.”

Tom was not the only one who expressed that Anna Bupp was their greatest role model. Anna’s younger sister, Sophie Bupp, explained, “Collin or Anna. Collin was like my brother and Anna was literally my sister. Collin helped me become a better instrumentalist. Anna helped me a lot in seeing how she was in leadership.

Drummers Matt Chapnell, Josh Bruce, and Tyler Mastropietro all expressed how Brandon Hunsinger has been the person who impacted them the most in their drumline experience. Tyler said that “ he made us better versions of ourselves.” Matt Chapnell agreed to what Tyler said and added, “Hunsinger has left the biggest impact on me because he taught me how things roll in the drumline and he set me up for when I would have to step up and be the leader for the future.”

No matter if these seniors looked up to someone in the grade under them, their sibling, or someone who taught them everything, they all wish the younger generation of the Shenango marching band the very best in the future.

Josh Bruce expressed, “I hope you get kids who will learn to have fun with the band and love what they’re doing instead of seeing it as work.”

“No one ever said life was going to be easy but just keep working,” flutist Nicolette said

Tom wished that every younger band member “to always chase their dreams.”

Drum major Sohphie Bupp wishes everyone in the marching band to, “learn that marching band is a family and a place to grow. I hope they learn to find the positive even when all they want to do is focus on the negative.”