You may have seen her twirling her baton at Friday night football games, fearlessly throwing it high in the air and catching it flawlessly, but have you ever seen her sitting as quiet as a mouse, focusing on her schoolwork? By doing just that, Angelle Bender has earned an honorable place in Shenango’s Top Ten.

Unlike most, Angelle does not have a specific influence when it comes to her academics. Angelle notes, however, “I just want to do well and others support me in that.” 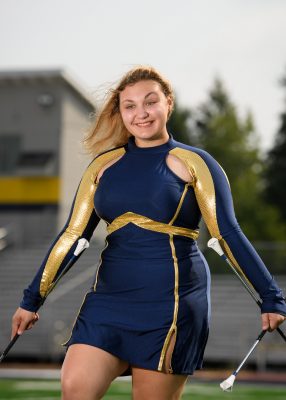 Angelle has a flair for creativity, which is why her favorite and most rewarding elective was “art because it allowed me to have a class where I could grow my art skills and relax a little as well.”  What most likely don’t know is that Angelle speaks German. “I have been taking German lessons for four years now with a nun from the Holy Transfiguration Monastery.”

Along with the respite she finds in the art room, it’s pure joy that she feels when she performs with the majorettes.  Her diligence and dedication to twirling are evident. “I really did enjoy being on the majorette squad because we all had a lot of fun performing together.”

For Angelle, she found the senior project, which required not only service and job shadowing, but a recorded interview as well, to be a challenge. “Overall, I think the senior project challenged me the most because it was very difficult to film the perfect video for the interview component.”

Even through all the tough classes and assignments, there has been one big goal that has kept Angelle inspired to continue to give her all. “My goal of becoming a doctor in the future has kept me motivated.”

With everything she has learned inside the classrooms at Shenango, there is plenty outside, as well, and her wisdom is evident in her observation that “you can never really gauge how someone is going to react to something until it happens.” With what Angelle has learned, she would like to give some advice to those who follow in her footsteps. “I would advise others to continue to push themselves to work the hardest they can because it does pay off in the end.”

She also encourages involvement in activities and extracurricular, noting that what she will miss the most as she prepares to leave high school is “being a part of the clubs and activities I was in while in school.”

Angelle plans to “attend college at Washington and Jefferson College where I will be studying Biochemistry and German. From there, I hope to go to medical school and eventually become a Rheumatologist. Shenango has prepared for this by helping me learn important things about myself that have helped me decide on this career and will continue to help me as I go on with my life.”

Her future path has been largely influenced by her own personal experiences, and she credits one of her doctors for helping her prepare for her future. “My current Pain Management doctor has taught me a lot about myself as well as the medical field which has given me a lot more of an understanding of what my future is going to look like.”