Shane Cato: In a League of His Own

He’s a star on the mound who recently helped the Wildcats become section champs, but Shane Cato’s story of success extends to the classroom as well.  Shane is a distinguished member of the Class of 2021’s Top 10 students.

Shane Cato is a motivated, highly intelligent student who credits his biggest academic influence as his mom. She keeps him motivated, by reminding him that if he wants to pursue a medical career, he has to “make school a priority.  She pushes me to keep good grades in all my classes and stay organized.” 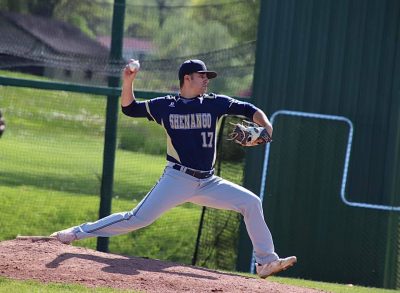 The class that challenged Shane the most academically was AP Chemistry taught by Mr. Vecenie. “To excel in his class, I had to stay on top of things [like] being organized with my work,” Shane explains.  “Also, the material he was teaching was difficult,which made me work harder to get a good grade in his class and pass the AP Chemistry exam.”

Shane is driven in the classroom because of his future career goals. Since he would like to pursue a career in medicine, he is aware that his focus must be on school. “I have to push myself to get good grades if I want to be in an occupation like that.”

Out of the vast array of things Shane has done for the high school, he will miss playing baseball the most.  “The sport has always been a part of my life and the memories I have made playing are unforgettable.”

Shane’s favorite elective over the years has been Spanish class. He enjoys learning a new language with his friends and being able to take what he’s learned and actually speak Spanish.

My future plans are to attend Grove City College majoring in Biochemistry and playing baseball. Shane notes that “Shenango has definitely prepared me academically, but also made me mature into the person I am today.”

As a senior, Shane is preparing to leave Shenango knowing the importance of not taking anything for granted. ” Enjoy things while you’re in the moment because life happens fast,” he advises.