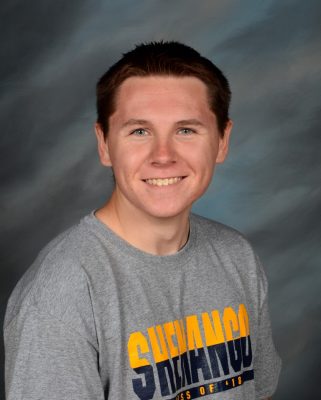 When seniors walk across the stage, receive their diplomas, and exit the doors of the school for the final time, their legacy continues to make Shenango proud.  One way that the achievements of alumni are recognized is through the J. Howard and Elizabeth M. Bruce scholarship.  Ty McClymonds, class of 2019, is the latest to join the list of prestigious Wildcats to receive this honor.

Established in 1997, the J. Howard and Elizabeth M. Bruce Scholarship awards $2500 annually to Shenango graduates who have completed at least one year of post-secondary education and have an interest in the sciences.

For Ty, this interest began in his high school classes, particularly his chemistry and physics courses.

“Both chemistry and physics influenced my major (mechatronics engineering technology) the most,” McClymonds shared.   “I found chemistry to be very interesting and physics to be very fun. The classes until that point were largely basic and simplified. There was something better about taking classes that were realistic and practical.”

He also stressed the value of his involvement in the STEM program, which gave him “a basic understanding of programming.”

Academics were only one piece of Ty’s success at Shenango, though, and he credits his involvement in athletics with equipping him with the necessary skills for success.   “As a four-year track and field athlete, I had to learn to manage my time between school, homework, practices, meets, and personal activities,” he explained.

Dr. McCormick remembers how Ty worked to master this balance.  “He possessed a strong combination of high academic ability with the willingness to get his hands dirty and work,” McCormick noted.  “He was sealing blacktop in the early mornings, landscaping in the evenings, and studying engineering in between.  That is an impressive display of work ethic and grit.”

As a Kent State student who has made the Dean’s List and the President’s List, Ty has not forgotten those influences who helped shape his future.  “I would have to say the most beneficial aspect of Shenango was the teachers,” he recalls.  “There were numerous teachers who helped me on my way. Mr. Mularski helped me become proficient in Spanish, Mr. Vecenie helped push me towards my athletic goals, and Mr. Bender started my understanding of physics.”

McClymonds offers some simple advice to current Wildcats, especially seniors who are about to begin the next chapter in their academic journey.  “Don’t stress about it. There are plenty of colleges and plenty of majors. And both can be changed at any point.”