Behind the Friday Night Lights

by Audrey Angelucci and Izzy DeVivo 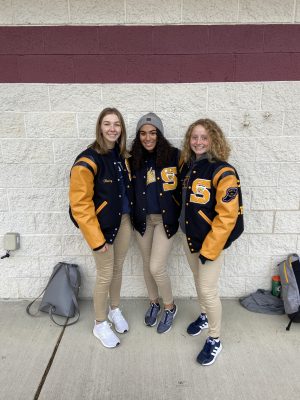 For seniors like Carmen, her experience on the sidelines has given her insight into her future.  “For me, I want to go to school for that when I graduate. I’m debating between sports psychology and majoring in exercise science,” explained Carmen.

Senior Mia Edwards’s future goals also relate to her role as an athletic trainer.  “I’m the same way. I’m interested in the field and I knew it would be fun.”

These girls are not only learning on the field but are also forming bonds with the players. At first, the girls were nervous the players might be unreceptive to their presence, but they quickly realized the boys have started to view them as part of the team.

Another benefit that all three are quick to point out is the relationship they’ve developed with athletic trainer Rob Powell. “He’s a very sarcastic person, and I think it rubbed off on all of us,” Mia noted.  “We also learned his sense of humor.”

Powell seems to enjoy working with these seniors too.  “Mia, Carmen, and Haley have many responsibilities that are helpful. They have each learned multiple taping techniques including wrist, ankle, and arch,” he explained. “They also each learned basic first aid and how to make and wrap ice bags. A typical day for them includes setting up for practice or games, helping to get athletes ready for participation, and general organization of the athletic training room. They are very helpful to reduce the congestion of athletes in the athletic training room.”

These seniors have learned a lot from the sidelines, and not all of what they witness is easy to stomach.  Some of the injuries have been eye-opening, like when a helicopter came during the homecoming game for a player from Burgettstown. He was life-flighted to a hospital in Pittsburgh due to head trauma.

“It was pretty scary.  A lot of people, especially the players, will speculate on what they think happened, and you take in a lot of perspectives from different people about injuries,” Carmen recalled.  “It’s tense when you don’t know for certain what kind of injury a player has suffered.”

Serious injuries aside, these three seniors have made memories that will last a lifetime and have shared a lot of laughs with their fellow Wildcats.

“I like how we get to interact with the team more.  We get to see behind-the-scenes from a different perspective than if we were just cheering them on in the student section,” Haley emphasized.