The Show Must Go On!

by Trinity Kohnen and Angelina Melillo 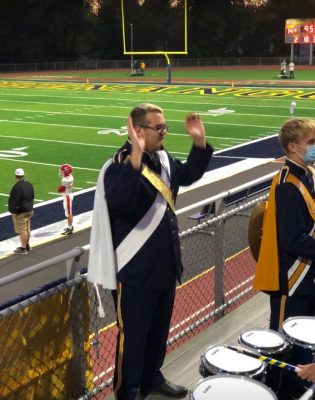 The time-honored traditions that make band camp such a memorable part of high school for the Wildcat Marching Band still shown through the pandemic that has loomed over the country since last March.  In fact, the band endured hours of practice in the hot sun learning formations and memorizing music, never knowing for certain if they’d even be allowed to set foot into the stadium in the fall.

Not only did the show go on, but it went on exceptionally. Marching band advisor, Mr. Doug Butchy, becomes emotional when talking about the 2021 senior class: “[The senior class was] really successful in their performances, and that’s been, as you know, very touching to me.” Even though the senior class is having anything but a normal senior year, they are still making the best out of everything. “What I will really remember is, with everything that has happened, the senior class has been so good at facing all the challenges and just persevering and working through it,” Butchy adds. 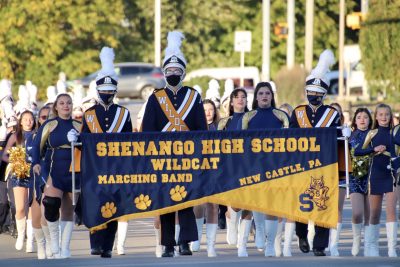 This year obviously has major obstacles to overcome, but Mr. Butchy has overcome every obstacle with just a few changes, “We had the musicians work in smaller groups more often than as a large group.” Mr. Butchy also took precautions with what the musicians wear. “We have musician masks with holes in them so that we can still wear masks while we play and we have bell covers for the instruments.”

This year has not come without major changes for others as well. Mrs. Deanna Othites, majorette advisor, notes that “we only had band camp for half of [what we should have]. Even though the band had half the time to learn and memorize everything, they did an outstanding job when it came to stepping on the field.” 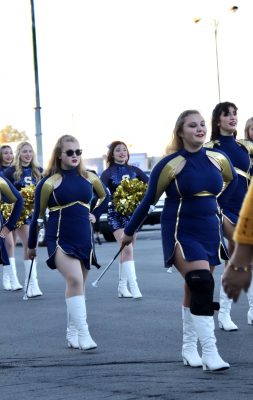 For Mrs. O and the majorettes, they not only had to adjust their practice schedule, but missed one of their members, 8th grader Maggie Miller. “Missing one of our [majorettes due to this pandemic] was obviously hard, but it is nice to know they are safe,” Mrs. O stresses.

Daily safety measures for the majorettes included wiping down batons, maintaining six feet without masks on, and wearing masks while on breaks.

These changes haven’t dampened the positive attitude of the majorettes.  One in particular, senior captain Angelle Bender says, “I think despite not having the usual circumstances, we still practiced hard, which allowed us to do our best as individuals as well as a team.” 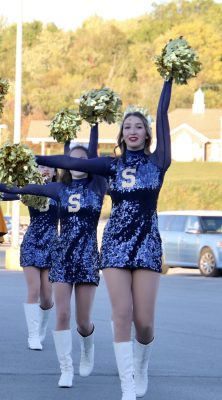 The Danceline has had many challenges with the unexpected events this year too. They had to put off working on lifts and kicklines, which ultimately put them behind, but that did not stop them from going out and performing exceptionally just like in years past.  Senior and danceline captain Abbi Ziegler states, “I love the family feel with the band.”

Marching band has had an extremely hard time this year with social distancing and keeping everyone safe and healthy, but senior and band member Aaron Didiano states, “Marching band is a great time because we all come together as one big family and make music and perform.”